Solar shades / eclipse glasses with an Optical Density of 5.0

The Solar Viewers by Baader Planetarium are a high-quality product which is extremly well suited for naked-eye solar observations. The most-common use-case for them are solar eclipses.

As the moon passes slowly in front of the sun, you can easily observe how the sun disappears behind it through the Solar Viewer. The spectacular event of a total solar eclipse itself, which usually lasts only for a few minutes, should then be enjoyed without the glasses and safely with the naked eye.

However, the SolarViewer can not only be used to monitor solar eclipses. You can also see larger sun spots through it, or simply discover the sun. 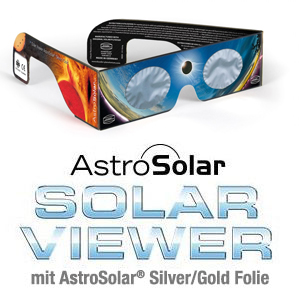 AstroSolar® Silver/Gold Film has been specially developed for visual solar observation at zero magnification for use with solar viewers. This film is only being used for production of our Solar Viewers.

The optical density of Solar Viewer Solar Viewer AstroSolar® Silver/Gold is OD 5.0. Our Solar Viewer are CE-certified and comply to the Norm EN ISO 12312-2:2015 – thus they are certified for a safe and direct view into the sun.

AstroSolar® Silver/Gold has no added treatments to attain fine-optical properties necessary for high magnification work. It is not suited to being used in combination with telescopes, binoculars, spotting scopes or camera lenses.

We are producing Baader AstroSolar® Silver Film for more than 25 years. In the year 1999, during the grand total eclipse over Europe, more than 20 million solar viewers equipped with this film were in use. For the great american solar eclipse in USA 2017 we now introduce the successor to the market: Solar Viewer AstroSolar® Silver/Gold, with eye-sided reflex-free material for an excellent viewing experience.

In contrast to the black, soot-filled light-absorbing films of other manufacturers, the reflective metal-layers of our AstroSolar® Silver/Gold Film are much more efficient at blocking the red (and especially the invisible infrared) light, and thus achieve a better security rating at the necessary optical densitiy of OD 5.0. 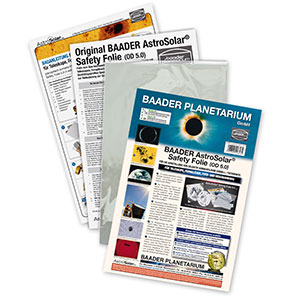 When using precision-grade AstroSolar® Safety Film (pictured at the right) for telescopes, perfect optical quality is most important. However – this film must be treated with great care since the metal and protective coatings applied onto both sides of the film are very similar in their technical properties to the reflective surface applied onto astronomical mirrors.

Since a Solar Viewer AstroSolar® Silver/Gold is used visually at zero magnification, the optical grade of the film is not of prime consideration. Instead it is most desirable to apply protective coatings of highest durability grade, to end up with a protective film of much higher resilience against inadverted rough handling. This is being achieved for AstroSolar® Silver/Gold Film with its metal hard coated layers applied onto both sides of the film, making it scratch resistant without sacrificing in sharpness and without creating a double image of the Sun due to adding up several layers of dark and/or reflective film onto each other.

A single layer of AstroSolar® Silver/Gold Film provides a perfectly sharp and energy balanced solar image – including the ability of identifying large sunspots and without transmitting irresponsible amounts of infrared(heat) radiation as with simpler sooth-filled energy absorbent films which do not offer added IR-blocking by metal reflective coatings.

Due to the dual side metallization process designed for AstroSolar® Silver/Gold Film, the film remains safe for a straight look into the Sun, even in case the front side of the viewer would suffer a scratch or mild kind of abuse. Still every solar viewer must always get a thorough inspection by the user to detect possible damages due to wrong handling and must be discharded in case a defect would be visible.

Never try to take an image of the sun through a Solar Viewer – neither through a camera or by mounting it in front of e.g. a pair of binoculars, because larger lenses will not be covered completely by the Solar Viewer. Solar Viewer AstroSolar® Silver/Gold may never be used together with any optics which are pointed at the sun without a solar filter. 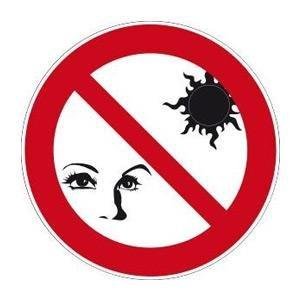 Never look at the sun with the naked eye without a Solar Viewer – danger!

Only and exclusivly during the few seconds of minutes of totality (when the sun is completely eclipsed by the moon) can you take a safe look at the sun's corona with the naked eye (see image below). Nevertheless, the complete eclipse, which lasts for hours – from the beginning when the moon touches the disk of the sun for the first time until the end, when it is completely visible again – must only be viewed through a safe and certified solar filter – the Baader Solar Viewer AstroSolar® Silver/Gold.

You must use a proper filter at any time for all other kinds of solar observation, too – no matter if during a partial eclipse, an annular eclipse, or simply your daily check for large solar spots. Even if the sun is eclipsed by 99%, the remaining sickle is is still so bright that you must use a good filter.

Never even try to look at the sun with your naked eye, regular sun glasses or insufficient filters! Every carelessness when chosing the right kind of protection can cause permanent eye damage or blindness.